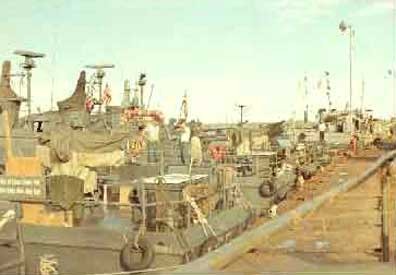 Base at Chu Lai

The primary US Navy activity at Chu Lai was the logistics support for both the Marine Air Units and Army Americal Division by material offloading of supplies from LST and other small cargo vessels proceeding from the larger ports at Da Nang, Qui Nhon and Cam Ranh Bay.

In early June 1967, PCF 45 was the first Swift Boat transferred from Cam Ranh to the newly forming CosDiv 16 at Chu Lai. After the long trip north, PCF 45 entered the narrow marked channel; turned abruptly left into the rock bordered shallow waters at the tip of the spit head entrance, and tied up stern first to the Swift Boat pier. 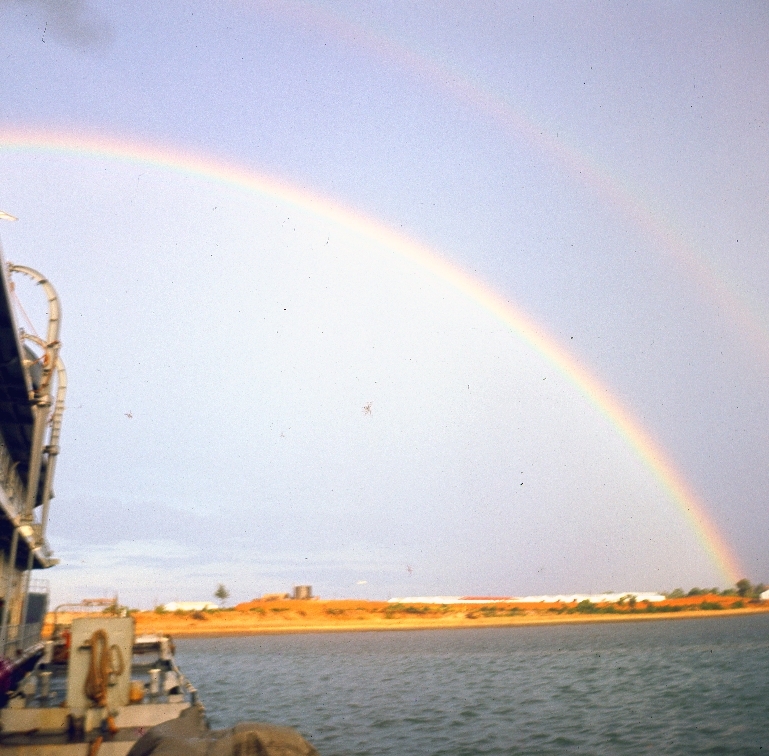 Double Rainbow over Chu Lai Base

Replacing the white sandy beaches of Cam Ranh Bay were the fine red dust and more noticeable presence of barbed wire and sand bagged bunkers in Chu Lai. The naval facilities at the harbor entrance were probably just as secure as those at Cam Ranh. In addition, living conditions while off patrol, although sparse, were no less comfortable. However, the general feeling was more "warlike" and matched the activity going on in the patrol areas around and north of Quang Ngai.

There was some doubt about the command structure for the new division. Were we a separate detachment of CosDiv 14 reporting to Cam Ranh? On temporary duty with the CosDiv 12 detachment already there? On the other hand, were we truly part of a new organization separate from both? Eventually, a Commander for the new division was assigned from Da Nang, and Coastal Division 16 became a reality and not just an idea. Concurrent with this activity, the assimilation of crew PCF 45, and those that followed from Cam Ranh, allowed the normal cycle and rhythm of operations.

Another aspect of the move north was that it was to a region where the "Sea Services" were dominant rather than the US Army. I Corps was the purview of the Third Marine Amphibious Force (III MAF), the commander of which was also the I Corps Commander. This made decision turn around on such tactical issues as indirect fire support much smoother. It also meant that the Navy supplied logistics support. 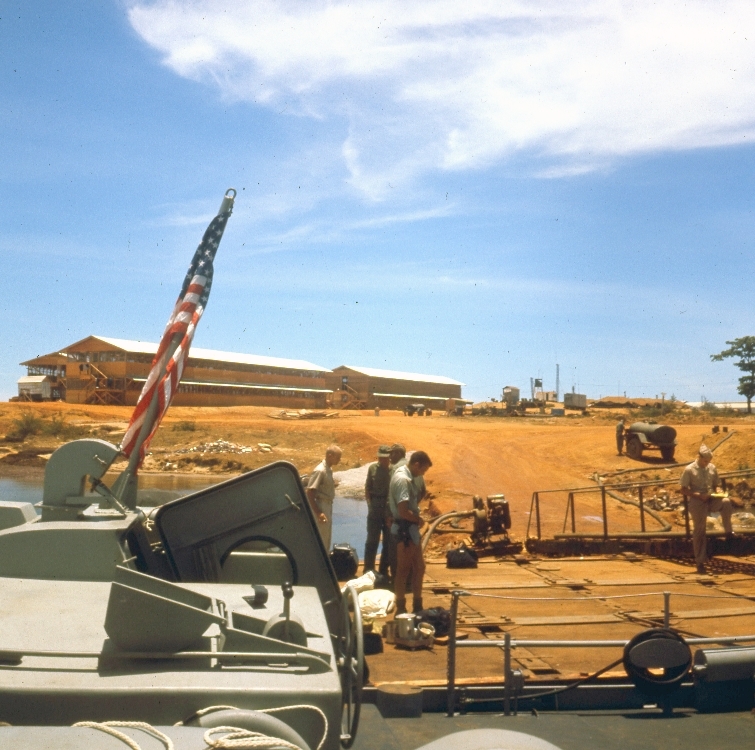 Barracks at Chu Lai Base

Even though the Marine Division in our area had recently been relieved by "Task Force Oregon", soon to be the re-formed 23rd (Americal) Infantry Division, the Naval Support Activity Detachment at Chu Lai was still in full swing. The naval base facilities reflected this, with the Seabees and supply folks doing a credible job providing a few amenities to the small portion of the much larger military presence at the base, including a very nice chapel and a Fleet Post Office in Chu Lai. Both were very important morale boosters.

A young supply Ensign assigned to the NSA Det, by the name of Roger Staubach, played catch with a football in off duty hours on the open field (called Staubach Stadium) next to the chapel. One of the crew even heard him remark as his receiver scrambled toward the sanctuary, "Watch this 'hail Mary' toss I am perfecting. I may just find a use for it someday ... perhaps against the Vikings!"

"Officer's Country" at CosDiv 16 consisted of "duplex hooches" with four to six Swift Boat "skippers" sharing each side of the duplex. Since half of the junior officers were on patrol at any one time, it might be days or even weeks before one would again be in touch with other occupants of a particular berthing area. The Seabees also provided modified metal storage barrels that made nice barbeque pits for "roll your own" alternatives to the mess hall fare. 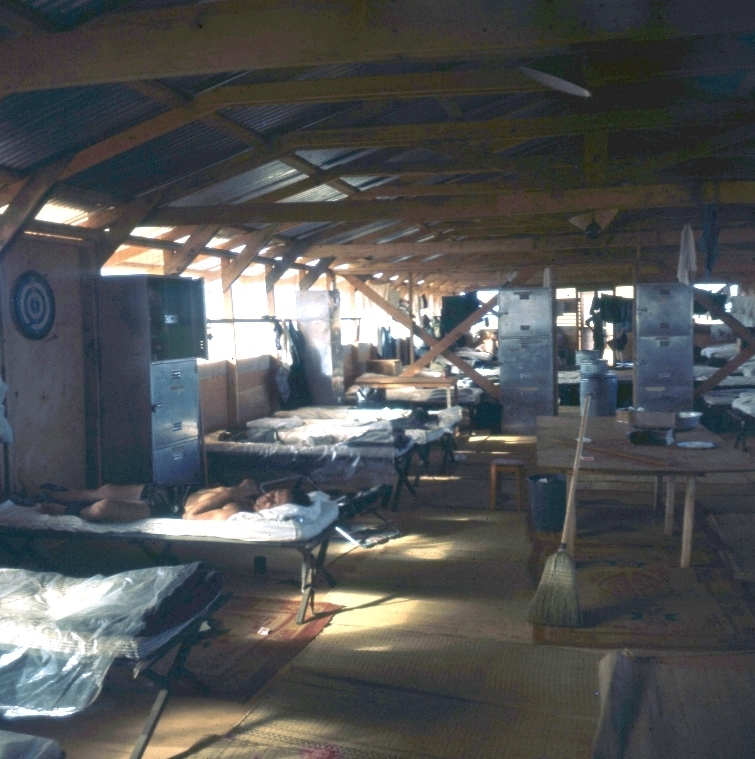 Barracks at Chu Lai Base

One facility that definitely was not provided by the Seabees was the Coastal Division 16 Junior Officer's Club. Use of a spare "hooch," midnight requisitioning of materials, including a green US Army blanket, and plenty of sweat equity soon resulted in a place where un-winding from the stress of the southern patrols could be practiced as only young Americans know how. Not exactly as elegant as the Taj Mahal at Qui Nhon, but pride of accomplishment and ownership overcame any such insignificant flaws.

The serious side of the Swift Boat operations in Chu Lai centered on the CosDiv 16 headquarters building and the local coastal and harbor operations center with its radar monitoring both Dung Quat Bay and the inner harbor.

Pride, and a strong desire to accomplish the tasks we had come to Vietnam to perform, was what Coastal Division 16 and the individual Swift Boat crews in it were most proud. The division insignia shield outside the enlisted barracks was strong evidence of this enthusiasm. Despite the restraints imposed on the crews from equipment shortcomings, and the pressure made to conform to traditional naval tactics, the members of the division were determined to take the conflict to the enemy in an area where we knew he was, and where we could make a significant difference - close to the coastline and rivers near Quang Ngai and Mui Batangan. The ace of spades, the South Vietnamese flag, and the skull said it all...! No Quarter!!

(The original text can be found at http://pcf45.com/chu_lai/chulai.html.  Permission to use granted by the owner of the PCF45.com.)