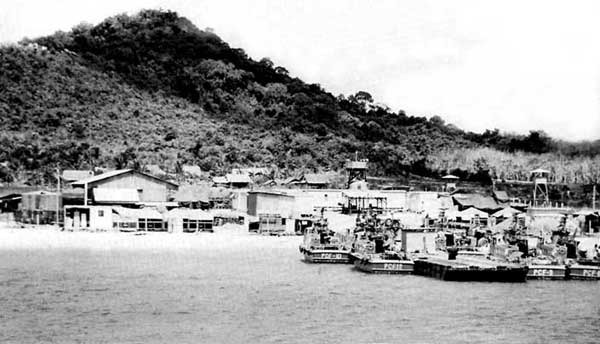 Base at An Thoi

The late summer of 1965 was a time of increased activity at the Naval Amphibious Base in Coronado as Swift Boats and sailors began arriving for the expedited effort to fulfill the urgent request from the Commander of the Military Assistance Command in Saigon, General William Westmoreland.  Shallow water resources bolstered the recently formed Coastal Surveillance Force attempting to stem the tide of North Vietnamese infiltration activities by sea into South Vietnam. The first two of an eventual fleet of one-hundred Swift Boats destined for service in South East Asia was rushed for staging in the Philippines directly from the Sewart Seacraft factory in Louisiana. Coronado was the work-up base for the initial deployment of these new craft and their crews to the two areas of Vietnam designated as being in the most critical need of the capabilities provided by these new vessels: Da Nang in the northern part of the country and Phu Quoc Island in the Gulf of Siam near the Cambodian border. 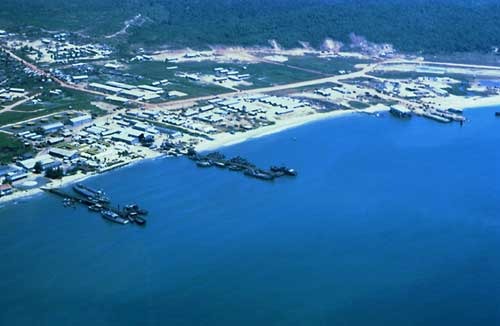 Sky View of Base at An Thoi

Of the initial eighteen Swift Boats delivered by Sewart, four (PCF's 1, 2, 7 and 8) were to be retained at Coronado to form the first increment of training boats to be used by the hastily put together Patrol Boat Division of the Naval Amphibious Training School. After a rapid check out, the follow-on boats went to Subic Bay, joining PCF's 3 and 4 already there, before moving to their final destinations in Vietnam.

A small group of the first sailors assigned to Swifts matched up with PCF's 3 and 4 in the Philippines ahead of the arrival of the larger group of volunteers. After a short familiarization period, these two boats were transported as deck cargo to Phu Quoc Island where the minimal base at An Thoi had been set up to receive them. They arrived on October 20, 1965 and immediately began combat patrols in the waters between the island and the mainland of Vietnam.

Then in late December, the other six boats assigned to Patrol Division 101 (PCFs 5, 6, 9, 10, 11, and 12) were loaded into the USS Catamount (LSD-17) and transported from Subic Bay to just offshore of Phu Quoc. The well deck gate of the Catamount was lowered, and the proud "Patrol Craft Fast" vessels demonstrated that they were aptly named as they proceeded at full bore into the harbor and tied up to the pier just in time to celebrate Christmas Eve December 24, 1965 in their new home at An Thoi. The first Swift Boat division in Vietnam was now open for business. 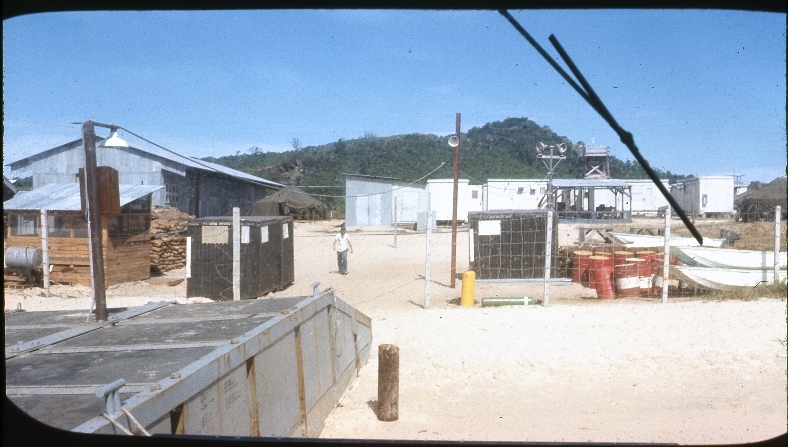 Because of the speed of the deployment of the Swifts, conditions at the base as the boats arrived were rudimentary bordering on non-existent. The only accommodations available ashore for the crews and support personnel were tents scrounged from wherever the navy could find them and assembled by the crews themselves. Facilities for maintenance, upkeep and repair of the boats simply were not available. Periodic visits to the offshore support vessel USS Krishna (ARL-38), the location of command staffs for both Patrol Craft Fast Division 101 and Coast Guard Squadron One, provided necessities such as fuel and ammunition. Meals were C-rations and whatever else could be scrounged from the Krishna or local inhabitants.

The South Vietnamese Navy that already had a small base established at An Thoi provided perimeter security. Basic services such as living space maintenance and laundry services were contracted out to locals from the small adjacent VNN dependent's village.

Perhaps it took an early visit by the Secretary of the Navy, Paul Nitze, to get things rolling at An Thoi. At any rate, after he spent a few days living in the tents, swatting mosquitos and participating in one or two patrols on the boats, "stuff" started arriving to make life more bearable. Most urgently were materials to construct copies of that staple of World War II, the Quonset hut. A combination of sailors from the Krishna, Seabees, local workers and Swift Boat crewmembers soon had the more substantial buildings up and ready for occupancy. 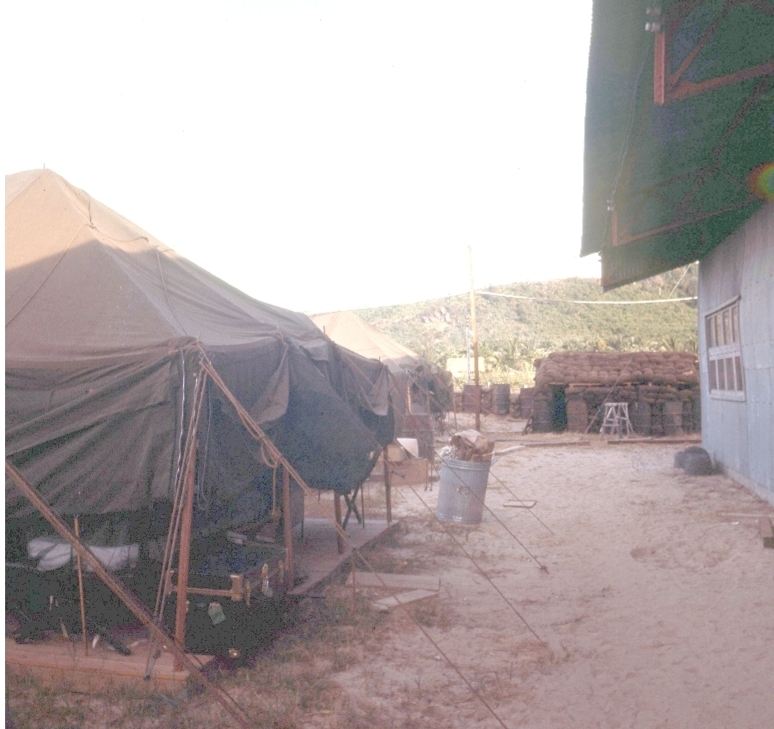 Soon a civilian construction company arrived and set up their own camp to house workers and equipment. A road from the base to the small airport on Phu Quoc was established and White Hat Airlines began periodic transportation flights to and from Saigon using the military version of the Douglas DC-3 aircraft.

A significant task for those establishing the bases of operations for the newly arrived Swift Boats was to set up the required facilities to dock, replenish, maintain and repair the boats.  The boats and crews would require constant care in order to sustain the tempo and level of operations envisioned by the planners of the interdiction strategy. Establishment of those capabilities took time and was still in the future. In the meantime, the boats and crews did the best they could with what they had available to them.

The most difficult job that needed addressing quickly was to define, develop and refine the roles of the Swifts in this new kind of warfare. There was no rulebook or set of official procedures to guide what, where and how the new arrivals were to provide the results asked of them: Stop the flow of arms, men and materials into the south that was sustaining the enemy soldiers that had infiltrated from North Vietnam. 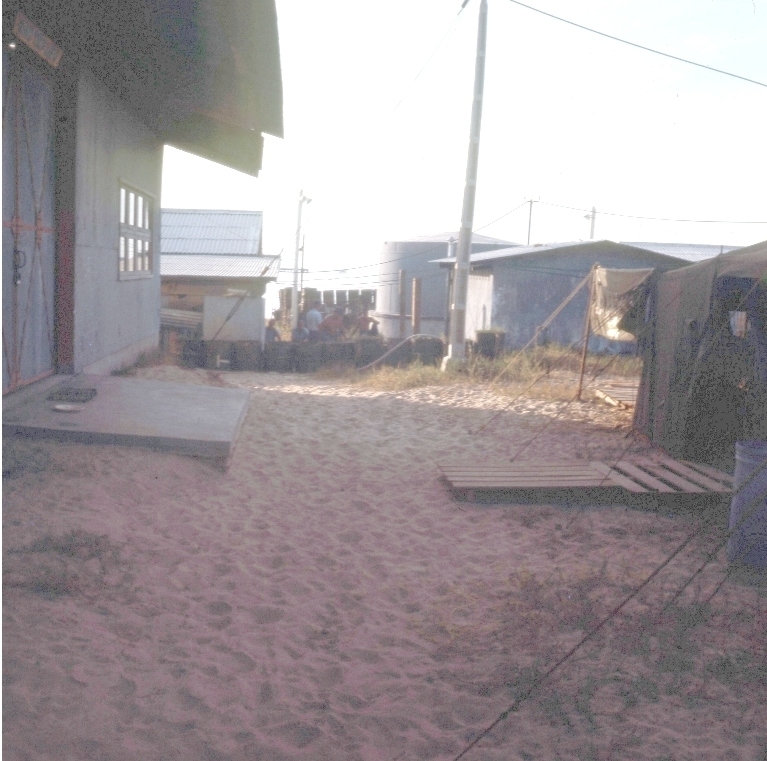 It did not take long for the Swift Boat sailors to work out the major tasks to be accomplished and the details of how to go about making sure they were performed successfully: Searching, boarding, checking, establishing rapport with the local junk owners to obtain the latest rumors and intelligence, pro-acting and then reacting with weapons support for the land based Vietnamese and American forces trying to pacify the coastal area, providing liaison with the larger units of the Coastal Surveillance Force further offshore, and giving interviews for public relations press reports made both in-country and back in the US. In addition, in spare moments making visits to establish friendships and assist the South Vietnamese Navy and the local population.

As the lessons were learned and perfected, they were written down and/or passed on informally and formally to the Swift Boat sailors that were preparing to enter the country and set up PCF divisions in other parts of the country. It was a difficult but interesting time to be a sailor participating in this new task, in a strange world with unknown dangers waiting to rise up and smite the neophytes at any moment. The mission, brought up to speed in such a short time, is a tribute to the men who manned the boats at this early stage.

However, the defining moment of transition between the excitement of this new adventure and the stark reality that Vietnam was a very dangerous place came with the tragic loss of PCF-4 only a few weeks into the new year of 1966. Somber perseverance and dedication replaced enthusiasm as the sadness of the sudden absence of close friends and shipmates marked the true nature of the task that these different kinds of sailors had embarked upon.

(The original text can be found at http://pcf45.com/anthoi/anthoi.html.  Permission to use granted by the owner of the PCF45.com.)