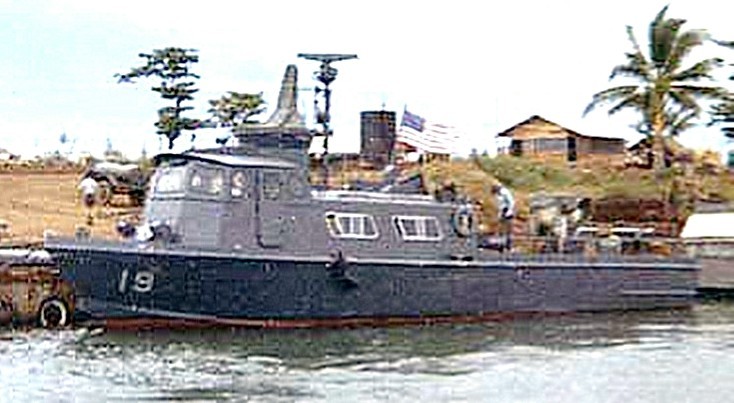 This is an audio tape taken by a Coastguardsman in CIC aboard USCG Campbell (W-32) shortly after PCF-19 went down.  The first five minutes are somewhat difficult to hear as two men are talking next to the recorder.  It eventually clears up after the first five minutes.  Among the call signs are USS Boston (Mauler), Enfield Cobra Xray(Campbell), Enfield Cobra Victor One(Point Dume), and Enfield Cobra Charlie(PCF-12).  This recording has been provided to SBSM by James Steffes, ENC USN Retired and author of "Swift Boat Down, The Real Story of the Sinking of PCF-19". 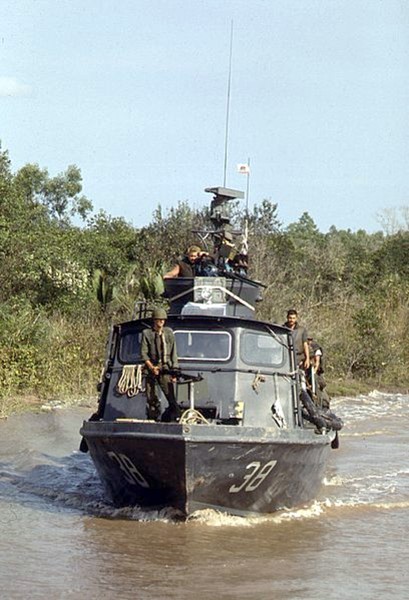 Unidentified correspondent narrates while riding in "Number 38" Swift boat during ambush. Mission aborted after "Number 31 boat" is hit and damaged. Medevac called for.

At cordinates WQ010500, the first five Swift Boats stopped and inserted their troops.  The remaining eight (8) boats proceeded up the river to insert their troops at a point to be determined by the Vietnamese Company Commander and his American Advisor aboard PCF 31.  At coordinates WQ045545, the column was taken under attack from the north bank with claymore mines, 75 mm recoiless rifles, B40 rockets, .51 caliber machine guns, rifle grenades and small arms fire.  All eight boats immediately attempted to suppress the enemy attack with return fire.

The two lead boats, PCF 5 and PCF 21, were engulfed in fire and smoke from several claymore mines. In addition, PCF 21 was hit with a B40 rocket on the port quarter just below the main deck, and both of these craft were sprayed with small arms fire and automatic weapons fire. The after gunner on PCF 5 was seriously wounded, with one Vietnamese Marine killed and four other Marines seriously wounded.  The next three boats - PCF's 31, 45 and 9 - were raked with small arms and multiple automatic weapons. This resulted in the forward machine gunners on both PCF 31 and PCF 45 being seriously wounded. However, both remained at their stations until clear of the ambush. One Vietnamese Marine on PCF 45 was also seriously wounded.  PCF 51 was hit by two B40 rockets which blew out all of the main cabin windows. This boat was also rocked by small arms and automatic weapons fire. The after gun mount loader, QM3 Thomas Holloway, was killed in action due to a single bullet wound. One of the B40 rockets hit five inches above the waterline on the portside, causing the loss of one engine. PCF 51 was able to proceed on its single engine out of the ambush area, where the other engine overheated and became disabled.  The 38 boat was also sprayed by small arms and heavy machine gun weapons fire.

The last boat in line, PCF 43, was hit with a claymore mine, one 75 mm recoiless rifle round and three B40 rockets.This devastating series of hits caused mortal injuries to the Officer-in-Charge, LTJG Donald Droz. In addition, HMC Robert Worthington of UDT Team 13 riding on this boat, was also killed in action. Two of the other UDT 13 team members on board were seriously wounded in this initial burst of enemy fire.  PCF 43 went out of control and beached in the center of the ambush area. 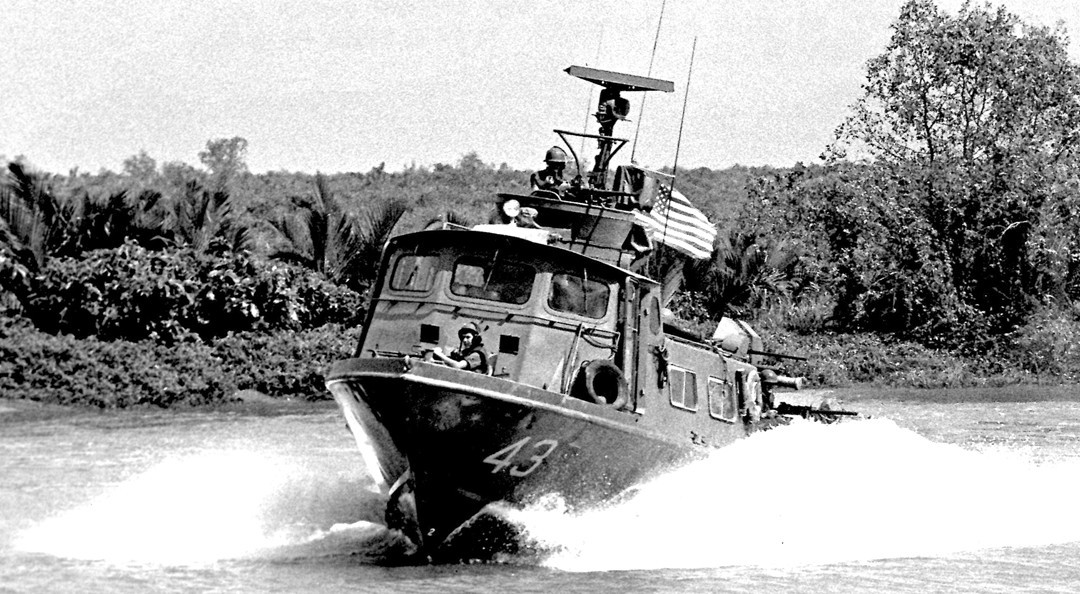 The Officer-in-Charge of PCF 38 observed this action, and turned back into the area to assist. As a result, the boat received two B40 rockets in the pilot house and cabin areas, which seriously wounded the OinC. These hits also jammed the pilot house steering system, with the rudder hard over left, and incapacitated the port engine. Despite serious wounds to his left leg and loss of hearing from the blast, the OinC immediately regained control of the boat from the after steering station.  Through his expert seamanship, PCF 38 was able to move outside the ambush area while suppressing enemy machine gun and small arms fire with its own weapons.

Meanwhile, the remaining damaged six boats (5, 21, 31, 45, 9 and 51) sped out of the kill zone and the OTC had them beach upstream from the ambush site in a clearing at cordinates WQ058558 to form a defensive perimeter. The OTC began seeking help in the form of MEDEVAC assistance for the wounded from the supporting SEAWOLF helicopters.

As soon as it was able to do so, PCF 38 informed the OTC, by radio, of PCF 43's dire circumstances. The SEAWOLF helicopters overhead, one with Captain Roy Hoffman - CTG 194.5 - on board, also observed that PCF-43 was in trouble and beached in a position down river from the other boats at the defensive location.

The OTC redirected the helicopters (SEAWOLF 14 and SEAWOLF 16) to provide covering fire for the disabled PCF 43. They proceeded to do so, laying down a barage of M-60 machine gun fire and 2.75 inch rockets into the enemy postions to provide relief for the men on the stricken Swift who had taken cover in the brush alongside their vessel and were returning fire with small arms, grenades and M-60 machine guns at the hostile forces in bunkers on the river bank.

Even though five undamaged Swifts (103, 23, 67, 93 & 94) were proceeding up river from the first troop insetion location (Objective 20), the OTC made the decision to attempt the rescue of PCF 43's personnel using the only two available boats from the up river location: PCF 5 and PCF 31 (with the OTC on board). Both boats returned to the ambush location with the Seawolf close air support still overhead.

PCF 5 attempted, unsuccesfully, to tow PCF 43 off the bank, while PCF 31 took aboard the men of the stricken Swift. Only three unharmed sailors were retreived from PCF 43. There were twelve seriously wounded men and the two KIA's. The bravery and skill of the crews of both PCF 5 and PCF 31 were directly responsible for saving the lives of the survivors.

With the rescue and evacuation completed, PCF 31 and PCF 5 returned to the MEDEVAC perimeter, where the dazed survivors of PCF 43 joined the somber procession of the wounded sailors and Marines being ferried to dustoff helicopters. Everyone seemed to be trying bravely to collect their thoughts concerning the events of the past hour.

The quick response, in the face of heavy enemy fire, by personnel in PCF 38, PCF 5, PCF 31, Seawolf 14 and Seawolf 16 was in the highest tradition of the Naval Service.  It is felt that their actions went well beyond the call of duty as they placed their units and themselves under point blank enemy fire from dug in positions in order to save the lives of their brothers-in-arms. The gunners and loaders on each of the individual Swift Boats demonstrated exceptional skill in pouring deadly accurate fire even in the face of withering enemy attacks. The helmsmen on the Swifts handled their boats with exceptional bravery and skill from exposed positions despite the danger from overwhelming opposition.

(Original text can be found at http://pcf45.com/sealords/silvermace/silvermace.html).